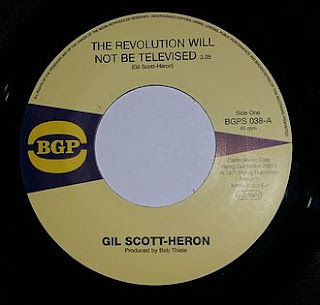 Funny how this album almost looks like a coin. The name of the album is "The Revolution Will Not Be Televised", which is a poem and song by Gil Scott-Heron.

In some ways, this is exactly what's going on in Venezuela. Bitcoin is enabling countries like Venezuela, which is in the midst of currency collapse, to sidestep the devastating effects of inflation with an alternative. Adding fuel to the fire, that alternative can be created with the right hardware and energy.

The creation of bitcoin with computer hardware and energy is referred to as mining. Countries with the lowest prices in energy production are the most profitable in making bitcoin. This is why China dominated in the bitcoin mining sector for so long (a point Bobby Lee made recently at the 2020Money Conference in Las Vegas). Chinese bitcoin miners were stealing energy. Now that the government is cracking down on that, mining has become more expensive.

Mining is gaining in popularity in Venezuela due to a combination of hyperinflation and subsidized energy prices. In other words, Venezuela is one of the most profitable places to mine bitcoin in the world. In some ways, what's going on in Venezuela is a digital currency revolution.

What does that mean -- a digital currency revolution?

In monetary terms, it means Venezuela is dying as a sovereign state. The new king is Bitcoin and its offspring. It appears the revolution may not be televised, but it will certainly be backed with digital currency.

At the heart of the issue is whether or not bitcoin is a system of storage or payments. It is a constant debate, but it deflects from the truth which is both. In addition, bitcoin provides transparency into the central bank and guards against government intervention or manipulation. For example, the global inter-bank payment system known as SWIFT threatened Russia, China and North Korea with removal. Is it any wonder that these nations are looking for alternatives?

From a practical perspective, the Crypto-Ruble is a national bitcoin. Russia wants to subsidize energy for those wanting to mine these "crypto-rubles" (even though energy is already much cheaper in Russia). The country plans on doing this through a kind of regulatory sand-box/incubator to see if it works before scaling. Unlike petro-dollars, "crypto-rubles" connect currency to ANY form of energy, even stolen energy. With this connection, Russia is trying to set up something akin to an energy payout for all residents -- much like the dividend that Alaska pays its people for oil.

Ultimately, these national crypto-experiments are just that, experiments, but Bitcoin has arrived -- it is its own asset class/unit of account and there's nothing the central banks/nation states can do about it because it is decentralized by nature. Any country, including Russia, trying to create a national Bitcoin will fail. After all, bitcoins that can only be mined by Russians are not bitcoin.
Posted by Bryant at 5:57 AM