John McAfee is The "Jim Cramer" of The Cryptocurrency World - [UPDATE: McAfee Was HACKED]

UPDATE: McAfee was hacked. See this video. It appears the hacker purchased the cryptos s/he tweeted while hacked into McAfee's account and made millions. The account has since been recovered. Still, be careful. If activity looks suspicious it probably is. McAfee said he was only going to make one recommendation a week. Why would he then do 5, back-to-back, in the middle of the week? Also be sure to watch this video and secure your crypto in your cold storage not on an exchange. ****


I must admit to being caught up in the cryptocurrency craze. I started trading cryptos about 6 months ago. In that short amount of time I've found a few trusted resources. John McAfee is among the most influential in the investment space; he is the Jim Cramer of the Bitcoin world. His tweets have become crypto buy signals.

John McAfee, the founder of McAfee security software, is a big believer in Bitcoin. In fact, he's committed to eating his own "manhood" if the cryptocurrency fails to reach $1 million by 2020. Personally, I think Bitcoin has the potential to go to $4 million (as I explain here) so this shouldn't be an issue.

Before going any further I want to say that this strategy only pertains to 25% of my crypto-portfolio, which is small. I made some quick money, withdrew the principal, and the rest is what I trade with.

My crypto portfolio (which is only a small portion of the overall) is composed of the following:
This post is regarding a strategy I've found to be useful with the third category. The third category is the only category I actively trade.

This strategy is based on social media more than anything else. I noticed that John McAfee has quite a following in the crypto-world. Unlike some of the other well known crypto all-stars, McAfee has no problem endorsing a new coin. And, when he talks, people listen. So far, he has 487K followers and the entire cryptocurrency world hangs on his next tweet.

Before getting into other coins, I want to take a moment to highlight what McAfee thinks about Bitcoin compared to other cryptos. Here's a tweet he sent out yesterday:

This was largely in response to the dip.

So that's how McAfee feels about Bitcoin, but he's still a big fan of the entire asset class. His recommendations have the power to move a coin up over 100% in 24 hours.

For example, on December 24 at 5:56 am, McAfee made the following tweet for Reddcoin (RDD): 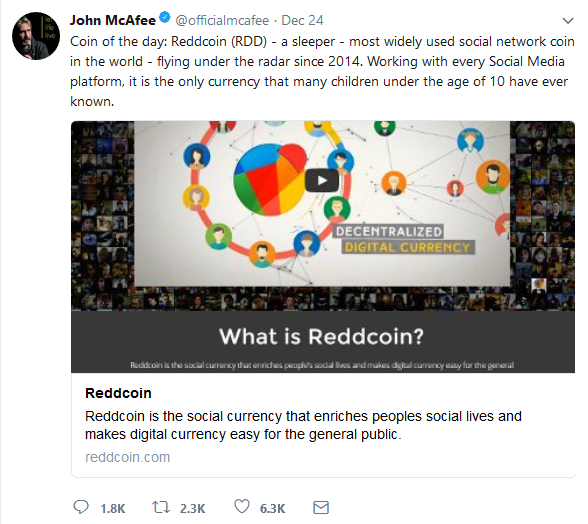 There are many more examples. Take a moment to toggle back and fourth between McAfee's Twitter Feed and CoinMarketCap.com. Look up a few coins and see how they performed within the next 24hrs of McAfee's Tweet. You will find similar opportunities.

What can you do to take advantage of this information? Every Monday McAfee is going to announce a new coin "coin of the day" via Twitter. He used to do this every day, but now he's going to drop to once per week per the tweet below:

That said, it doesn't hurt to monitor his account other days as well, but Monday will be the big day. As soon as he makes the announcement, buy and take profit at 100%. The price has been known to go up more than 100%, but this way you lock in profits.

If you're confused about how to find the best market to trade in, stay tuned for my next article. Hint: it depends on the coin.