The Rules of The Simulation & Neuroscience: The Relationship Between You And The Controller


As a general warning to my readers, this article is very different from what I normally write about, but I don't think it's possible to separate belief system from everyday life if you want to live well. And, based on new discoveries in quantum science, separating the two may even be hindering progress in everything we do, especially if we 'believe' the path toward progress is a difficult one. In such a case, we could be the creators of our own hell. Of course the opposite may also be true, which should make this article worth reading.

What Do I Believe? We Are Living In A Simulation


I believe that we create our own reality. I believe we can do this because we live in a simulation. This may seem like science fiction, but there's a dearth of scientific (repeatable) evidence out there that says otherwise.  One of my favorite discussions on the topic is the 2016 Isaac Asimov Memorial Debate: Is the Universe a Simulation?(see below)

Let's assume we're both on the same page and we both believe we are living in a simulation. Now what? The next step is to figure out the rules of the simulation so we can get the most out of this life.

The Relationship Between Newtonian & Quantum Physics


We know the physical rules of the world are based in Newtonian physics: an action or cause creates the effect or reaction.

We also know the rules of the world are based in Quantum physics, the study of matter at the atomic level. At this level, however, the laws are reversed. At the quantum level the action or cause follows the effect or reaction. Again, this is provable, peer-reviewed, repeatable science.

In the following video, Dr. Joe talks about these questions. Specifically, he discusses the relationship between you and your "self" (the person playing the game). He gives a few ideas on ways you can tap into your infinite self using the laws of quantum physics.

The most common way is to imagine yourself as the person you need to be in order to be the person who does the things you want to do. That sentence takes a bit of unraveling, but here's an example of an exercise that will help.

Why and how does this exercise work: neuroscience

Studies show that what you imagine to be happening is actually happening as far as your brain is concerned. Let that sink in for a moment. For example, scientists have shown that if a person imagines eating, if they imagine the entire process and all its sensations as clearly as they can, they will have less appetite for more food afterwards, just as if they've actually eaten. It doesn't stop at mental suggestion. Another study found that just thinking about exercise can build muscle. This puts a different spin on the practice of prayer and meditation.

It is possible to live out the experience you want to have in your mind. If you're really good at this, if you have a vivid imagination, you can imagine whoever you want to be. Masters of this practice can effect change in real-time. And, if we are infinite beings having a finite experience on earth, it would seem that it's the infinite being that operates on the quantum level and the finite being that operates on the physical level. We are both. In other words, if this is a great big simulation, you are the player in a Newtonian world, and your infinite soul is the controller in the Quantum world. You can communicate with the controller with your thoughts. Emotions amplify your thoughts.

It should be easy to concentrate on what you want, but it isn't. We are not wired (quite literally) to think that way. In fact, when in survival mode we are wired to think about all the bad things that can happen. Murphy's Law even tells us to expect the worst in order to prepare for the worst, but in a world where thoughts create reality, this way of thinking can be a living state of hell. The person who follows Murphy's Law is in a state of perpetual survival at their own hand.

What happens when you start meditating or praying every morning on who you want to be? As soon as you start to see yourself through the eyes of both you and the "self", it will change the way you view everything. 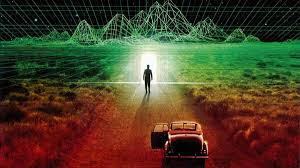 Quantum physics tells us that the more you are able to feel that bliss experience in your mind, the more you can expect for it to manifest in your 'reality'. And, when it does, your mind will reward you with the revelation that it can happen again.